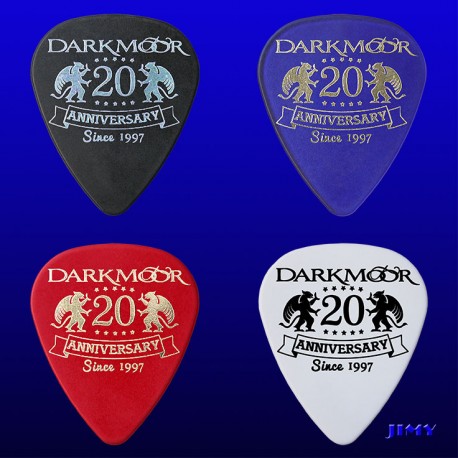 It was during the complicated crisis of the early '90s, in 1993, when Dark Moor is born under Enrik Garcia´s hand.

In 1999, Dark Moor achieves its first contract. It is the right momento to record the first album of the band "Shadowland", thanks to the interest of Arise records, wich makes them loyal to this label to launch their posterior works.

The record get better results than expected,reaching to the point of being edited in central Europe or Brazil, and letting the doors open to make a memorable Spanish tour with Demons & Wizards.

Since then, the band record two more albums (The Hall Of The Olden Dreams, and The Gates Of Oblivion) and two EP´s (The fall of Melniboné and Between Light and Darkness) and one cover song "Halloween" for the tribute album, "The keepers of Jericho" and play in places like Rock Machina, Viña Rock, Nit de Reis or Metal Christmas, and get a deal with JVC to cover the Asian market.

After this EP(Between Light and Darkness), a change ocurred that would be fundamental for the new sound of Dark Moor, and for its definitive international renown. The entry of Alfred Romero as the new lead singer. Alfred gives his personality and unique voice and they all travel to Italy one more time in order to record "Dark Moor", the fourth long-lenght, cd of the band. With a rawer and improved sound achieving a touch of international quality thanks to the contributionnof Alfred´s special voice.

They finaly got an international tour,conquering Spain,Belgium,and France with After Forever.

Besides this tour,the band also makes a tour around Spain and participates in a few festivals,emphasizing their performance in Viña Rock,where thousands of people have the chance of watching them.

The moment of this new confirmation comes during summer 2004,with the recordings of the fifth album of the group, "Beyond the Sea",which will see the light on early 2005.The record keep strong in all markets, despite of the international crisis.

With this album, Dark Moor also make their first video clip of the single "Before the Duel" with nearly a million people see it in youtube.

Starting afterwards their usual Spanish tour and playing in several festivals in Spain,Italy,France and Switzerland.

In this important moment they receive bad news, their label Arise records announce their dissolution.

In summer 2006, between negotiations for the future, the recordings of their sixth work start. For this new record, named " Tarot " they will rely on the new drummer of the band Roberto Cappa.

With the new album, Dark Moor soon get a new label for Europe and America: Scarlet Records. They also get a deal with Avalon Marquee for the distribution of the cd in the Asian Market. Dark Moor now record the videoclip for the new single, called "the Chariot" with more than a half million viewers today.

Soon after being released," Tarot " receives the best critics of the band´s history, being considered best album of the month by Metal Hammer(Spain),Powerplay(UK),Metal reviews(USA),Heavyowl(Germany),and best album of the year by Heavylaw(France).

the band gets now on tour all around Spain to introduce the new album, and from this tour a new clip is born: "Wheel of fortune", mixing live sound with studio sound.

Thanks to the great impact caused by " Tarot ", the band travels to South America for the first time, performing in Chile, Peru, and Brazil. So Dark Moor becomes the first Spanish band playing in Brazilian stages. They complete this with some festivals in France and Spain.

In August 2008 with a great expectancy from the fans, Dark Moor come back to Italy with their producer Luigi Stefanini, in order to record what is going to be the seventh long-lenght album of the band.

Following the release of the critically-acclaimed "Tarot" which confirmed their status as one of the leading forces in the European metal scene, the Spanish power/symphonic metallers Dark Moor are ready to come back with a new, exciting album, the sevent in their prestigious career ,the new masterpiece is called " Autumnal " full of powerful symphonic metal and with new sounds like celtic athmospheres of "Phantom Queen" gothic -oriented of "The Enchanted Forest" or arabian melodies of"When The sun is Gone" ,following the release of the album, the band film another clip for the song "On The Hill of Dreams" with the new bass player Mario Garcia.

With this new album, they play again in France and achieve new goals in Russia or Czech Republic after presenting it in Madrid, Valencia o Vitoria, so that they become the most international band born in Spain in the symphonic metal.

In november 2010 its new work will born. It is recorded as the others in the New Sin Studios, commanded by Luigi Stefanini and supported by the italian company Scarlet Records. Its title, " Ancestral Romance " is a sing to Spain, its art and artist. The new album will be a new step in the carrier of the group and it will contain its identity signs: musical excelence, big symphonic themes, full of catchy chorus and memorable melodies that, for sure, their fans will be crazy about all over the world.

The Ancestral Romance album, gained very good reviews a cross the world, 91/100 in the very important japanese magazine BURRN!, follow this, the band recorded a new video-clip based in the lovers of Teruel with great response in Youtube, and do concerts in Teruel, Madrid in two shows, one of them in theme park, Murcia, Rock in Somma Festival Milan, Viña Rock Festival among others.

This year 2013 is a busy year for the band, their new album "Ars Musica" released in June comes with the video clip of the song "The Road Again" see for more than 50.000 people in one month, and have the best critics/sales in their career: number 1 in Amazon Spain/France, 4 in Amazon UK, in top downloads charts and number 5 in Japan Heavy Metal/ Rock charts, the band plans for the near future are Touring in the coming months, and for the first time in their history play in China and Mexico four confirmed dates, and with more dates to come in this country, and in others places unconfirmed, the future comes more brighter than ever for the band.